I had a 19 year old patient one night who came in with her boyfriend for “arm pain”. She had her left arm in a sling and she wouldn’t let go of it with her right hand. I went in to check her out after the nurse had her signed in. She was anxious and emotional, and her arm was obviously in pretty terrible pain. She had good sensory function in her fingers, good pulses and capillary refill, but she couldn’t grip my fingers with her left hand. I didn’t think it was due to a physiological defect, it was probably just too painful. It’s hard to explain, but there is a different look to someone who can’t move, as opposed to someone who simply won’t because of the pain.

She answered, “I was lying in bed and I rolled over and hit my elbow on the wall.”

Her boyfriend cut in, “Yeah, didn’t you say you hit your funny bone? Show him where it hurts baby.”

She pointed to a spot on the ulnar side of her forearm, the bony part about three inches below her elbow. I took the sling off to take a better look. There was a swelling hematoma forming on the surface over her ulna, and the whole area was so tender and she was so hysterical there was no point in doing any more examination. It would only cause her pain and not tell me anything I wouldn’t learn when the x-ray came back.

So I went out to wait for that and talk it over with the ER Doc. See, here’s the thing. It is next to impossible to break a bone knocking your elbow against a wall. Not only that, but when you roll over and smack your elbow against a wall you hit the head of the humerus, and maybe if you are very, very skinny, the very tip of your ulna. Long before you hit hard enough to break a bone, a healthy young woman is going to put her elbow through the plaster or wallboard. Bone is a lot harder. Yeah, it can hurt to jolt the ulnar nerve, what we call the “funny bone”, but it goes away in minutes, it doesn’t break bone, and it certainly doesn’t cause a transverse fracture of the ulna three inches lower. Sure enough, that’s what the x-ray showed. One of the bones of her forearm was cracked right through, but still in place without angulation. This is what we call a defensive injury, meaning it is associated with someone putting a forearm up to ward off a blow to the head.

The ER Doc went in and showed her the x-ray, and asked her boyfriend to step out for a few minutes. He refused. The doctor asked her again how this happened. She said she fell out of bed onto the floor. He explained that didn’t make sense, and asked if someone had maybe hit her in the forearm with a stick or a pipe or something. She denied it. He explained that if she was being hit, or if she remembered anything different eventually she could come back in and we had resources for her. There is an organization here that provides free shelter to women and children in dangerous domestic situations. She said she was fine. She just wanted pain meds and a cast.

So the doctor sent the nurse in to splint the arm and fix the sling so it would work right. I went in to watch and size up the boyfriend. He wouldn’t make eye-contact with me until just as they were leaving, but right at the end I caught his eye and looked him dead on.

There is no proof, of course, and we can’t press charges without her consent. But I believe he is guilty. So I stared him down. Irrationally I wanted him to take a swing at me. He was taller than I am by about four or five inches, and heavier by at least twenty pounds, but I guarantee in a fight I would kill him, because the extent of his courage is beating up on a woman.

But if she won’t stand up for herself, there is nothing I can do for her.

I had a 58 year old patient one night who came in because he couldn’t stop bleeding.


The first sight I had of him was when I glanced into the room where the nurse was checking him in. I wasn’t planning on talking to him, but he was sitting on the gurney with his feet towards me, and a bloody washcloth between his feet. My eye zoomed straight in to a definite blood splatter right across his crotch! Now, here’s the thing about blood. It doesn’t go up, usually. It goes down. Unless, of course, it is squirting out of something, like say, an open artery. Veins don’t squirt, only arteries do. But even if it was an arterial bleed, how would it squirt upwards from his ankle to his crotch? It took me a few minutes to get the story straight, but eventually it came out that he had been lying on his back with his leg up in the air when the bleeding started. He had been taking off his socks to go to bed and he had felt something rough underneath the sock. He scratched it and it came off and started bleeding, and he couldn’t get it to stop, so he went and stood in the bath tub and called his daughter. She came to see and she couldn’t get it to stop either, so she covered it with a wash cloth, took off her belt, wrapped it three times around his ankle, and buckled it. Then she drove him into the ER where I saw him. It’s somewhat ironic that my intervention was to teach a man in his fifties how to stop a bleeding cut with direct pressure and to scold him for picking at his scabs. Seriously though, the number of people who don’t know how to do something as simple as stop bleeding is astonishing. Even civilian EMS personnel are generally useless at stopping bleeding.

This incident led the nurse to share a story from when she was working in a trauma center in a major city (I won’t say which city, but it was in the New York, San Francisco, Houston level of majorness) and an upper class looking lady came running in at three in the morning with blood all over her face. “Look,” she said, “I don’t want you to tell anyone I’m here, and I don’t want anyone to know what happened.”

“You have a nose bleed. What’s so terrible about that?”

“I was picking my nose. People cannot know about this!”

I don’t know whether or not that ever got out, but apparently the mayor, before she left for the hospital had called her son when she couldn’t get the bleeding to stop. Then she had decided she didn’t want him to know what happened, hung up and left for the ER herself. He was worried, so he came over and knocked on her door, and getting no response, peered in through the windows. And of course, all he saw was an empty house with blood all over the floor. So he called his buddies and they kicked down the door and raided his mom’s house while she was at the ER. I wonder how she explained that one when she came home to a house surrounded by lights and sirens.

Hey Dad, can I help? 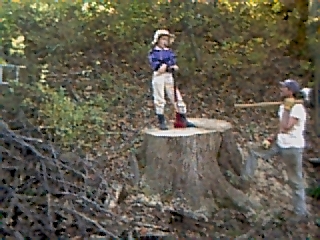 This is a very old photo. I think it is actually a digital picture of an old film photo my mom took before they invented digital cameras.

I don't know how many times we got in the way, slowed down the work, messed up the projects, and just plain made a nuisance of ourselves in our eagerness to help Daddy outside. For the first few years we weren't much earthly use out there. He could have gotten things done ten times faster without us, most of the time, but he let us help out.

I was reminded of this because of a conversation I had. We had been talking about the difference between merely accepting God's will, since He is going to get His way no matter what we do, and positively embracing it. I said that we should try to go beyond merely doing what He wants because we really have to, and try to be eager about it. We should ask Him, "Hey, can I help? Is there anything I can do? Please." She said to me, "I'm afraid to want to help God because I'm sure I'll mess it up." I've felt that many times myself. It was good for me to hear someone else say it, because it's always easier to see the truth when someone else is missing it than when I am the one missing it.

I don't think God cares whether we mess up the work in our eagerness to help him, anymore than my father did. Sometimes it might have gotten a little annoying, and the work might have taken a lot longer, but my father didn't work to get the job done. He worked to raise us. We were the final cause and end of his work, so he could deal with a little chaos and delay from us. It was all about what was best for us, from beginning to end. That's what fatherhood is all about. He learned it from God. God's fatherhood is for our sake. The work He does is for our sake, and He is more than capable of doing it without us, but it would be for nothing without us. Just as my father might have gotten the work done faster without us, and it would have been a waste if we had never learned to work ourselves, so with Jesus we must "Be about our Father's business." He doesn't need us to do it. But He wants us.